God who made the world and everything…..himself gives to all mankind life and breath.  He made from one man every nation of mankind to live on all the face of earth, having determined allotted periods and boundaries of their dwelling place, that they should seek God, in the hope that they might feel their way toward him and find him. Yet he  is actually not far from each one of us for ‘In him we live and move and have our being’. Acts 17:24-28

The Lord of heaven and earth is the source of life of  every person, the source of the very historical and geographical aspect of every nation. He spread the people and nations across the face of the earth and commissioned us to go with the message of the gospel.

We began to go to the nations and undertake prayer drives because of His instructions “Go walk through the length and breadth of the land for I give it to you”. “Ask of me I will give you the nations as your inheritance and the uttermost parts of the earth for your possession”.

We drove to Canada for a vacation and felt that God has already set a stage by revealing Himself  through His beautiful creation and His wonderful people spread far and wide across Canada. We needed to just pray, that they should know Him.

Passing through the gates at the country’s boarder to enter into the city of Toronto, we built a highway of prayer for that great city, remembering its leaders,

educational institutions corporations, infrastructure, public offices and also for the people that they will know Him. John 17:3. We drove and sailed through north eastern states of New Brunswick, Nova Scotia, Newfoundland, Quebec, Ontario and came back home covering over 4000 miles.

Starting from our home in Richmond, we prayed for the cities and metros, of Washington DC, Baltimore, New York, Boston, Sydney, St Anthony, Quebec city, Montreal, Ottawa, Toronto, Niagara falls, Buffalo etc., and remembered that God is concerned about the cities, its people and even livestock as written in Jonah 4:11.

We arrived at St. Anthony, Newfoundland and saw the magnificent the ice bergs.

We went on a boat

tour and listened to the marine scientist expressing concern over global warming, about polar bears swimming and floating on ice and landing in Newfoundland. We prayed on conservation and global warming and for the fisher folk that live along the coast of St Anthony.

And at the site where Vikings were believed to have landed and stayed for a very short period of time many centuries ago even before Christopher Columbus came to the Americas. 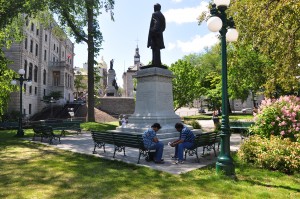 A stately building in Montreal. Looking like a watch tower; reminding us of God calling us to be watchmen on the walls. Isaiah 62:6-7

An art work at a parking lot in Montreal depicting the Inuit people that live in Canada  and Greenland. ‘Make disciples of all ethnic groups’ so said Jesus. The gospel will be proclaimed to every nation, tribe, people and language and are seen present before the throne; so is said of the people groups of the world in the book of Revelation.

We passed through Parliament Hill, the political and cultural heart of the city of Ottawa, the beautiful street  with Gothic style structures and banners. We prayed for the public offices, for the Prime Minister and the Queen and the heads of all the states of Canada.