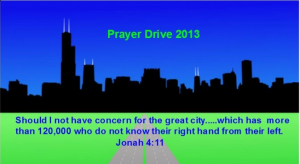 In response  to the question that God posed “Should I not have concern for the great city  which has more than one hundred and twenty thousand who do not know their right hand from their left. Jonah 4:11, we set out to pray for the cities of North East of US and Canada this year.

Of nearly 7 billion inhabitants of the earth, it is estimated that 47 percent of them live in a city. It is said that if we reach the cities, we’ll reach the nations. With over 83 percent of the population living in metropolitan areas, the major population centers in North America are important to God’s kingdom.

In the Summer of 2013, we drove to the North East as far as St Anthony, Newfoundland, Canada and prayed for the cities and the people along the way.
As we drove through the state of Ontario, Canada we came across traffic sign boards at every city that detailed, the name of the city and its population.
We took it as a sign to pray for every person that lives in the cities we passed through, resonating with God’s concern for every person of the city of Ninevah.

In the Fall of 2013, we went on a focused prayer drive from Richmond, VA to Maine. We started by gathered information of major cities of US, its history, government, demographics, its strongholds and joined hands with other intercessors to lift up these places to the Lord.

As instructed in Isaiah 62:10, we built a prayer highway as we drove through the gates of these cities, removed the stones (strongholds)using our spiritual weapons and raised His banner as we worshipped, prayed and proclaimed His name.

Prayer Drive 2013, was all about “Praying with compassion, at location, with information, against opposition, for His glorification and His kingdom expansion.”